We want to introduce you to the 5th member of our family!
Rather - EVIDENCE of another member!
Here...Coy will show you
.
.
.
.
. 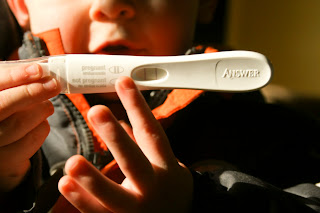 And here's how it began.
Well, you know how it really began, but here's now we found out ;)
On our trip to WI in January, I started feeling nauseas, but assumed it was a stomach bug since we were around a lot of people and you can always bet that someone is carrying something. I took it easy, I layed down, I tried to aviod heavy foods that would make me feel worse, I took my temp...but it never changed.
Dad said "I bet youre pregnant"
I said "No...I just had my, ya know, period not long ago"
Dad still said "I think you're pregnant"
So a week after we'd been there, and I was still feeling sick,  Lindsay brought over a $1 pregnancy test. I took it. Negative. Ok, I was bummed a little. So I really wasn't pregnant...I was just fighting a bug. All the way home (then it was blamed on motion sickness) and all that week I was STILL sick!
One Saturday after we were home, we drove up to Missoula to go to a Griz basketball game. Now more and more I was beginning to think that I *could* be pregnant...and when I spotted a Walgreens, I make Logan whip in so I could pick up a test. So all the way from the Walgreens to the Adams Center, we had butterflies, wondering.  Once at the game, I stopped at the rest room while the boys found their seats..................
And I came back out with a HUGE smile....I couldn't have stopped smiling even if I wanted to!
I walked into the stadium, everyone else around me seemed nearly non-existant. I scanned the crowd for the boys - and when I spotted them, Logan knew right away by my beaming face that I had seen TWO PINK LINES!!
Of course, I saved that basketball game ticket for the new baby book :)
_______________
We saw our midwife this week, and got to see our tiny babe!
And even after two children already, this sure is NOT old hat, it's just as exciting as the two before.
Hearing that fast, tiny, yet so strong heartbeat is so reassuring and beautiful!. Another blessing. Another miracle!
We are 10 weeks, putting this new baby due September 30. I have been really sick, really tired, and really really hormonal. Even though that's "just pregnancy" and normal, I'm getting pretty impatient for the day when Im feeling better!
Posted by Elissa & Logan at 3:51 PM

Number Three-I'll put in to the gender decision makers for a girl;] hehe

Sorry about all the loverly aspects of hormones, but hope your nausea slows down!!

Thinking about you! Love you
Me

CONGRATULATIONS!!!! That is very exciting news. : ) Hope your pregnancy goes smoothly and that you feel better soon!

:) Yay, I am speechless in a way cuz every thing I want to say, just might not be for all the public... :O

Glad you little ones have the opportunity of growing up in a little town. WE so miss and Loved Stevensville!!!

Great story! I can just see you smiling through a million people! :) Congratulations!!

That is so exciting...congrats! Love the story. It IS really fun when you have that moment of finding out that you really are pregnant! Hope you start feeling better soon and hope it all goes well. Hooray for another cute Braaten baby :)