Dirt. Water. Plants. Shovel. And all those added together means I get a quiet house while I pack for convention. That also means I have an extra hour of cleaning before we leave this afternoon. 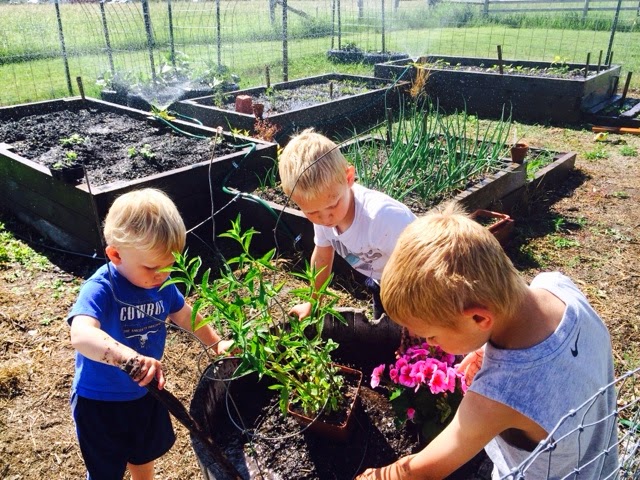 We have a Max.
We also have a sweet little nephew Max, but not that kind of Max.
The Max that cause trouble of one kind or another...
And was sent to bed without his supper.
No.2 was a bit too lippy and a bit too rough for a bit too long yesterday, and was sent to bed without supper for the first, and hopefully last, time. I never understood that consequence, but I'll admit, in the heat of it, it sounded pretty darn permissable. He became king of his transformed bedroom to his monsters within...then just like the real story goes, found that world pointless and did get to later come out and enjoy the last part of the evening (and a cold supper) with us.
This sweet photo of him 3 years ago is kept close by for when I need reminding that he's not always wiggling with intense explosive energy. 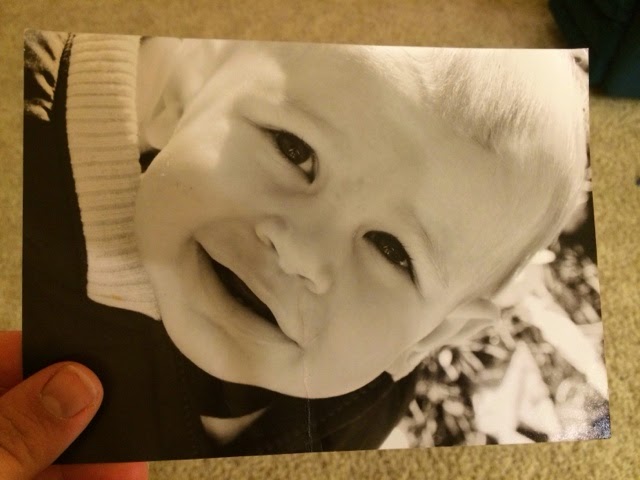 So even though it's a Monday, we are praying for a more peaceful day.
Happy Wild Thing Monday to you! But not too wild...
Posted by Elissa & Logan at 8:55 AM 5 comments:

Tales of a Fantastic Roadtrip - Part 1

At the beginning of June, we took a biiiig trip!!
Like as "big as the world" in the eyes of the little boys who sat in the van that long. 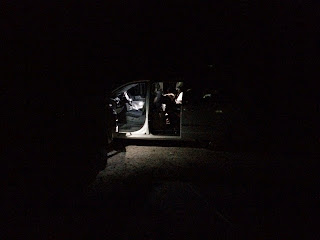 We left early early in the morning to start our 1,600 mile (one way) journey from Stevensville MT to Newberry MI. The occasion? My big bro, Ted, was gettin' married! Hopefully the only wedding of Teds that we would attend, so we were excited and happy to trek halfway across the country to watch him commit in love to his bride!


The van was clean...amazingly clean. For a few hours. Then, became a mess of wires and snacks. Surprisingly, no one puked on this trip, so we can say it was a success. :P 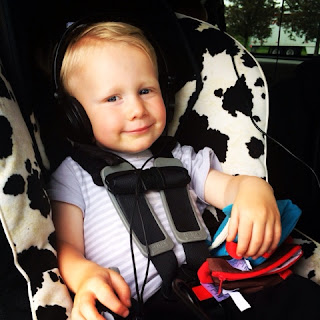 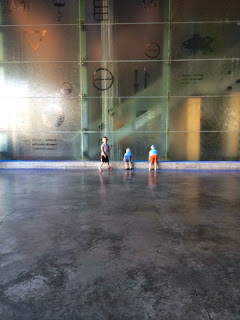 We made it all the way across to Duluth MN before we stopped for a big play stop. We had spent the night at Aunt Evelyns in Fargo, and that's one of our best stops, but kids had to go to sleep there, which actually wasn't fun...according to them. ;)
This is the Great Lakes Aquarium. FUN FUN FUN place to be! We started off by watching the massive snapping turtle get fed a pretty good size fish. Although as first bummed to find out that there are no sharks in the Great Lakes, thus no sharks in the aquarium, they were so intrigued by all the huge tanks and fresh water fish of all sorts. 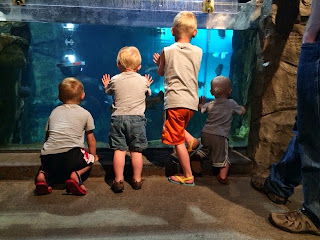 This tank had an underwater camera that you could drive up and down and it showed live feed on a screen nearby. It was two stories high, so one big boy would drive the camera and the other would run down the flight of steps and around the corner to watch it come all the way down to the lower floor. Then they'd switch and the other would drive or watch it come up. Fearing we'd get kicked out, I finally decided it was worth wearing off the extra energy to take the chance :D 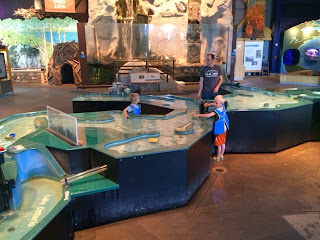 We actually didn't get kicked out, so we got to see the Great Lakes system at the end of the tour. Kids (and daddy!) played for a long time in the locks and waterways models that are actually in the Great Lakes. We got to experiment with making waves too. There was SO much to see and learn, but the kids were too young to want to sit and learn in a huge exciting place. Maybe in a few years we can classify a special trip there as a "fieldtrip"? 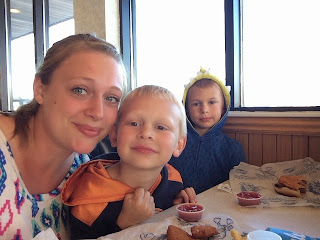 Alas, we knew we were in the right region when we hit CULVERS! Our first Culvers meal was just across the border into northern WI. 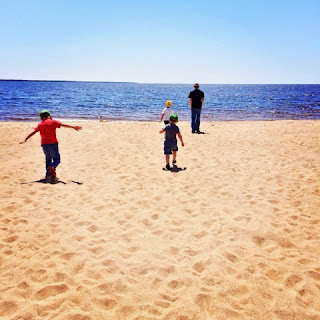 From Duluth, we drove late late late into the night until we hit Escanaba, MI. It was a very cute little town on Lake Michigan, with a beach SO beautiful you'd hardly believe you were in Yooper country! Uncle Chase & Auntie Sarah met us there and we hotel'd it together for a couple days. 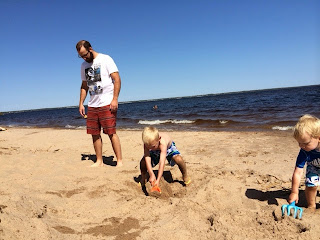 The water was a bit chilly for swimming yet and we were warned by locals about the strong currents, but it didn't make a difference to the boys - their dreams were to just play in the sand! We found sand toys at a local toy store and they paid their price 10 times over! Digging holes, carrying water, burying eachother with happy help from Uncle Chase...it was the perfect destination for a bunch of little (and big) boys. 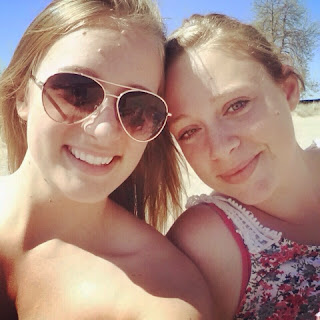 And for the girls too...Sarah and I worked on our tan while drinking locally brewed iced coffee. (She is dressed, btw. Her nakedness is an illusion) But forgot sunscreen, so I was a little too pink for the wedding. Duh me. >:(

Although fun, I realized just how much I miss my family! The time I'm with them reminds me of their awesomeness and why I love them to freakin' much! Aaaaand, because they got us all ice cream cones. They're awesome. A real kind of awesome.

More pictures a later day. Kids are migrating outside and I've discovered by unfortunate incident they need to be supervised.

A fun boy kinda day may include, but is not limited to;
-running around till your pants fall down, and laugh histarically when everyone trips simultaneously
-not being able to read the word "king" in Matt.2 without someone shouting "I'm theeee kiiiiiing!!"
-laughing at anything potty related
Posted by Elissa & Logan at 8:15 AM No comments:

“The process of living seems to consist in coming to realize truths so ancient and simple that, if stated, they sound like barren platitudes.” –C.S. Lewis

This quote knocked me down to the floor a few months ago. Why am I always frustrated, doing things "just to get by", and missing the beautiful blessings in every hour? I realized my need to simplify. Simplify my thoughts. Simplify my efforts. Simplify things. Seems like such a simple solution to allow the peace and beauty back into my every day.

One step in simplifying my life is getting rid of my social media crutch. Get rid of (even if it's unconsciously) the comparing my life to others, judging what's not my place to judge, gathering strong opinions about things I really don't care about, and worrying about things that are not mine to worry about.

Which means that I will be blogging more. I know, I say that like every 6 months, but I realized that a lot of the most important people in my life don't have facebook.

And now I don't even know where to start back up again!! This spring has brought SO much fun with these little boys that sometimes I can't believe this is my REAL job. Then, however, were the challenges I never wanted to deal with...but our lives paint a large picture that requires that kind of color and detail to make it beautiful.

We have a zillion pictures and memories from this months trip to UPMI/WI for a beautiful wedding and family time. It brought a bunch of adventure, and I'll slowly share those pictures :)

For today, this picture tugs at me heart :) 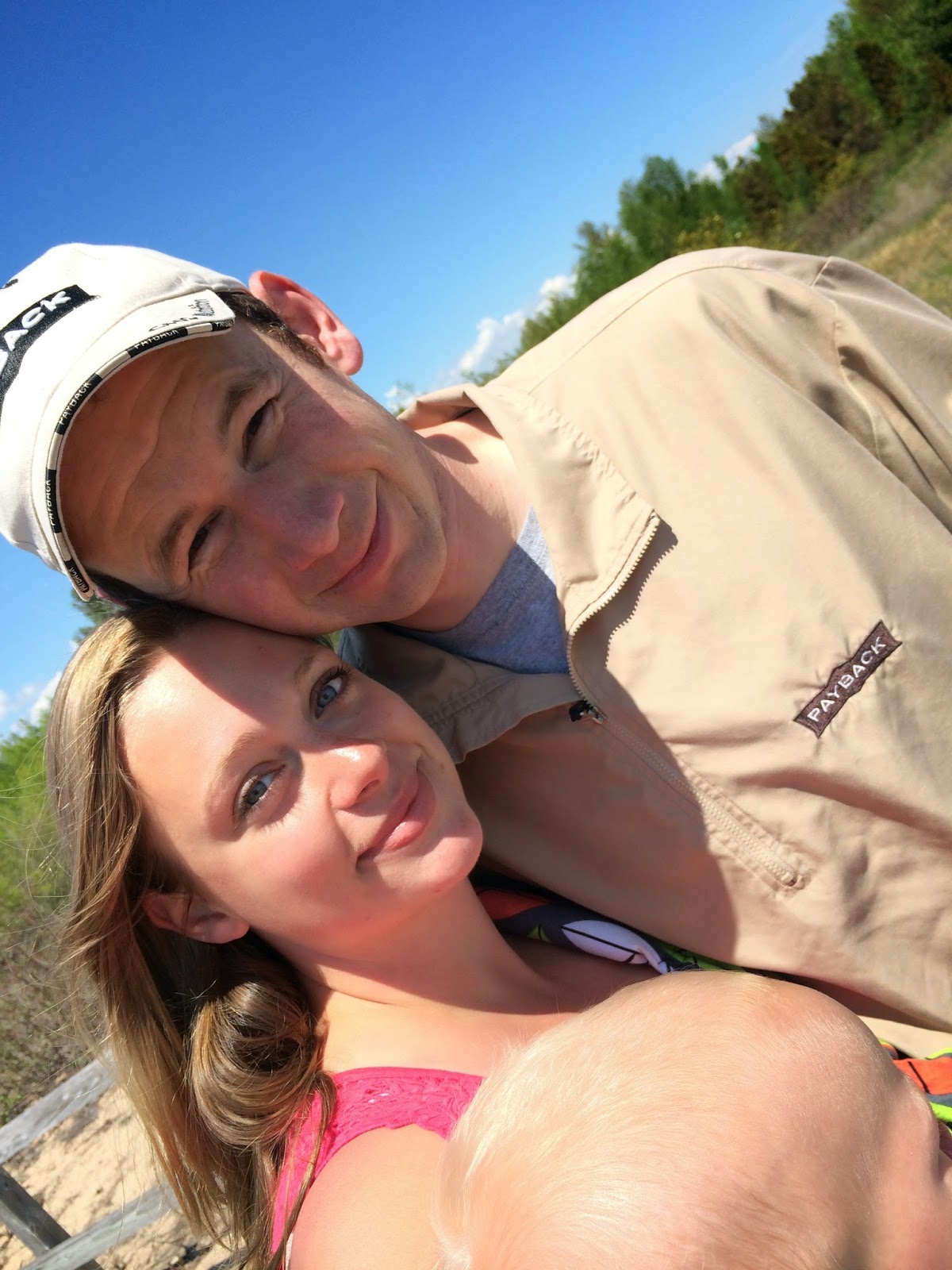