I'm going to update quick before we leave for 4 awesome days of convention and there is absolutely NO possibility of posting! That's right..every day there usually IS a possibility, but of course...never happens ;)

KASE IS CRAWLING!! (In case time is flying fast for you too, he's EIGHT months..) He's been moving for about a month, but just in the last 2 weeks has mastered the art of crawling, and is now faster then ever!! Except when he's on the hard floor....he tries his hardest to keep up with his super fast brothers but ends up spinning out instead, with a little fluffy butt wagging like crazy! 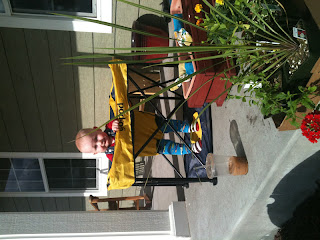 Coy and Bentley are currently fighting like cats and dogs...so it's hard for me to brag about them at the moment....


But really, they are great too :) Bentley loves to escape outside any chance he has. Lately hes been putting on his mud boots and telling me with all seriousness that he's going out to feed his cows. In this case, it's Coy who's doing the following because B is so intent on feeding his cows that Coy knows he will NOT change his mind and play anything else.
There's still dirt in our front yard so they love scooping dirt from old flower pot to old flower pot. And occasionally to the front steps...which results in them whining while they clean it off :D 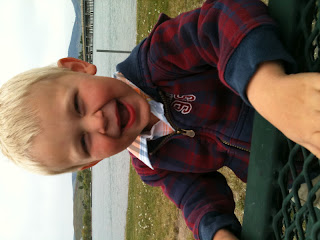 Coy loves talking about letters and is learning beginning sounds! He will sometimes go around saying things like "Firetruck....ffff.....fffff....F!" He's a bright little boy! 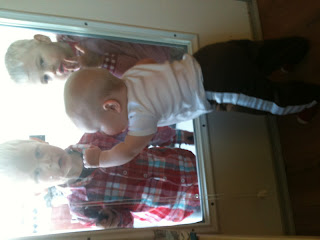 It's green outside because it's been raining. But what's NOT green? My garden!! I have just been too busy to get a garden in. I figure though, if I'm too busy to START it, I will be too busy to WEED it! I feel better already :)

Brown Cow Cotton has been taking off awesomely! As of today I've had 74 sales!! And now I'm wishing I had a little more time for that too! I find most of my sewing time when Kase is digging quietly in his bin of toys and the big boys are playing right outside the sewing room window. This is probably my most favorite diaper so far : Sock Monkey diaper! My 2nd favorite is the Very Hungry Caterpillar. :) 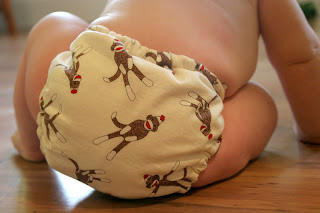 The other week I got to intruduce another special guy into my life! His name is Brett and he's 2 months old. I spend at least a half hour everyday thinking of him as I'm pumping breast milk for him! His birth mommy was an exchange student from Ecuador at a local high school. She had the baby while she was here, but couldn't take him with, so her teacher adopted him. His adoptive mom desperately wanted breast milk for the little guy, which is so awesome!! And because I have that stuff, we meet everyother week where I donate to her my extra that I have pumped! It takes a lot of extra time and energy, but it's worth it to see a momma so thankful to revieve what she knows is best for her baby! <3
Anyway...time to get crackin! I have a few things left to pack, and then cleaning this disaster house! Tonight we head up to Ronan for the annual Tuesday night pig roast and to take the worker pictures!