It's been far over a week, so here's another quick update on this little family. Nothing news worthy, but little things that form childhood memories and make this mama both exasperated and grateful! 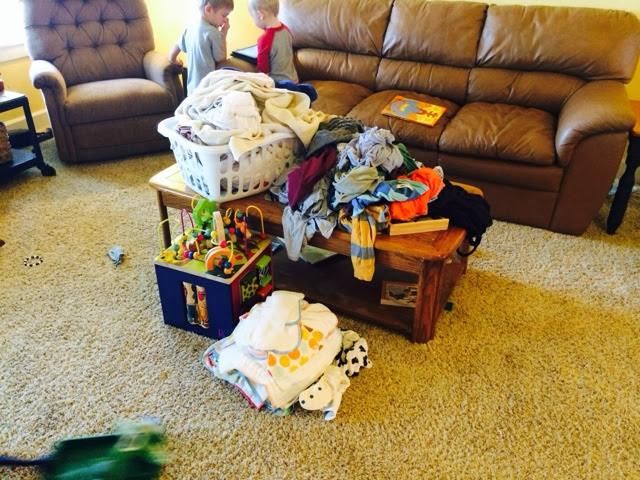 This is an honesty shot. What the living room really looked like yesterday. 3 loads if laundry...a basket of towels, load of colored, and a tall stack of diapers, with more tumbeling about in the background. A nose picker. And two boys on the tablet. Sometimes, but rarely, I do give in and let them play whatever they wish, just to keep my sanity. 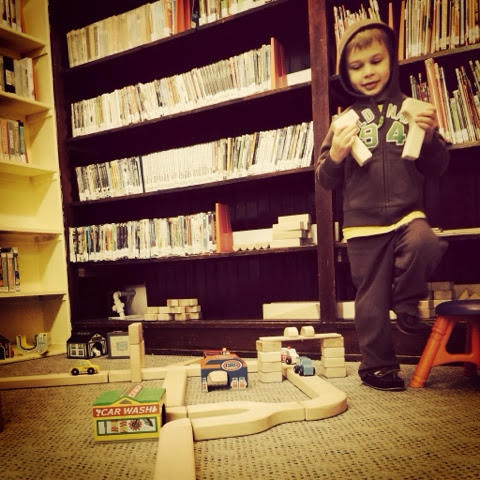 Saturday, Bentley and I went to the library... Just that big boy and I. We made a city from the wooden block, then read "if you give a pig a pancake" at least 5 times. Then he checked that same book out and we have read it at least 15 times here! It is a cute book, if you've never read it :) 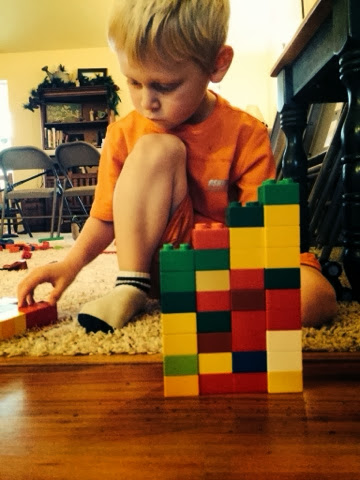 Coy has been doing math/counting with Legos. Complete win/win! He's learning and playing..what learning is all about! 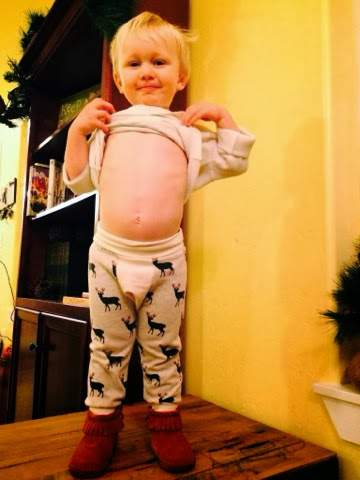 This guy. *snicker, snicker* This guy is a hoot!! He is also rocking the undies! Potty training for him started about a month ago --- his idea! He seems to think he gets the weekends off however, so that imposes (revert to picture no.1) more laundry!! But he's getting it down and I'm as proud of that little guy as he is of his firm and soft tummy! 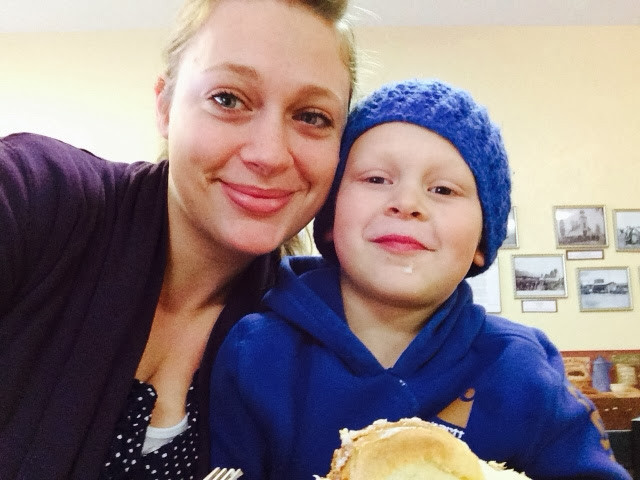 The Saturday before, it was just coy and I that got a little morning outing in. We went to the New Coffee Mill for a cinnamon roll and coffee. But because he's underage, he only sipped their hot chocolate. I love spending time alone with each kid individually. They get along great with each other, but to focus on just them during their special time brings out bits of their sweet little personalities that we don't always get to see! 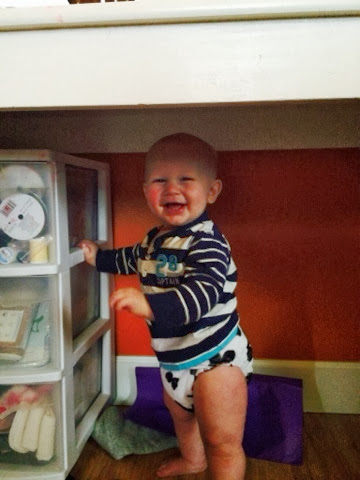 And, then there's Reid! Funny little monkey who always has us on our toes. Putting things in his mouth...daring to stand on his own...finding himself stuck in places...he's an adventurist! He still only has two teeth, but we can only guess that more are on their way by his unusual hours of fussiness. Fussy is hard to endure for hours and hours, but it's the squeels of joy and those cute, cute dimples that make up for it!!
A special friend mentioned that life gets "sugar coated" of Facebook and blogs because (most times, most people) only the good stuff gets posted. AGREED! So, to keep it real...I will let you know there has also been door slamming, hollering, hourly messes, biting (only once or twice, don't panick!), fighting, headaches, sassing, toy throwing, toy taking away....
Oh, the life of kids!
Wouldn't change a thing :)
Posted by Elissa & Logan at 6:37 AM No comments:

Has everyone had a great holiday...and now recovering? ;)
After our wonderful Christmas day, we packed up and drove the beautiful 120 miles to Kalispell. We are always welcomed with lights glowing in the night, greeting us, beckoning us inside from the cold night air that smells ever so lightly like, uh, pigs :) 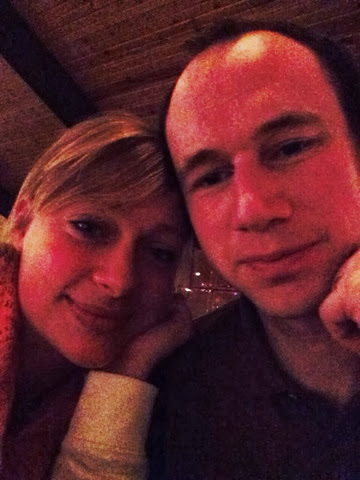 Logan's wonderful parents watched the kids and gifted an early anniversary meal out to us! It was a beautiful night and a very nice and tasty restaurant called Jagz in Whitefish. After our meal of steak and pork tenderloin and pecans, we decided to go for ice cream. Yes, ice cream, in the winter. Never felt warmer though, walking hand in hand with the man I said "I do" to 7 years ago! 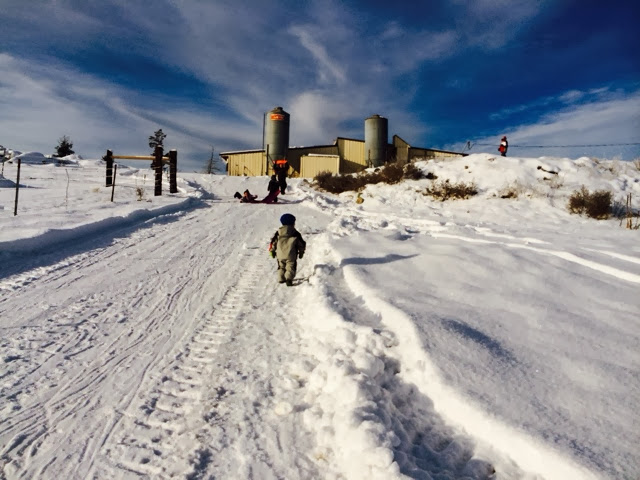 It was beyond beautiful at the farm...and the sledding hill took up all of one morning and part of an afternoon. Cousins ran up...glided down, time after time after time. Their amount of energy is incredible when they're sledding. Kids never complained of being tired once when going back up the hill....so now I KNOW they're lying when the boys say they're "too tired" to pick up their train tracks ;) 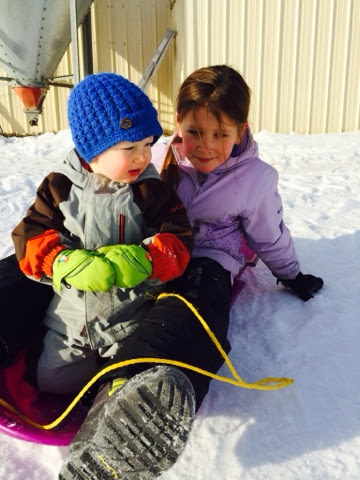 Here's Kadyn and Kase ready for a run down. 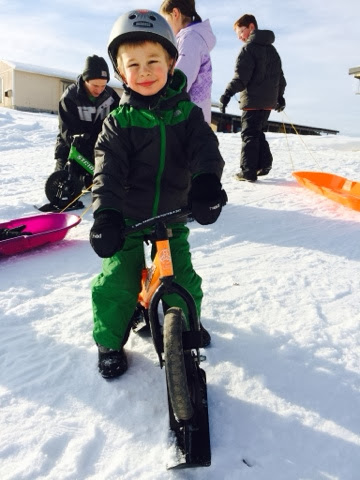 Boys brought their Strider bikes, and Grandma and Papa had some skis to put on them. Wonderful invention..they all had a blast on them! Even daddy took a ride down. Ha! 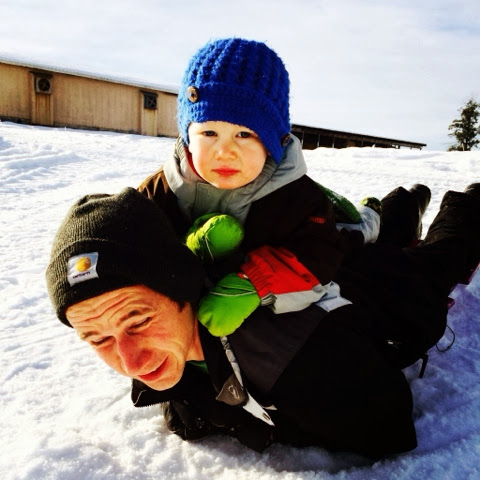 Kase was the luckiest sledder of all...help down AND up every time :) 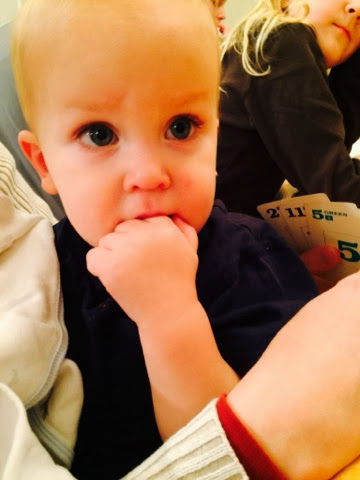 We were so lucky to get to go see Adrian and Anna TWICE that weekend! We played Tetris, Rook, and Thump while the kids all played incredibly well together. The bounce house is a magnet, and the boys like older kids to hang out with, and of course another couple boys to understand they're boy kind of games! 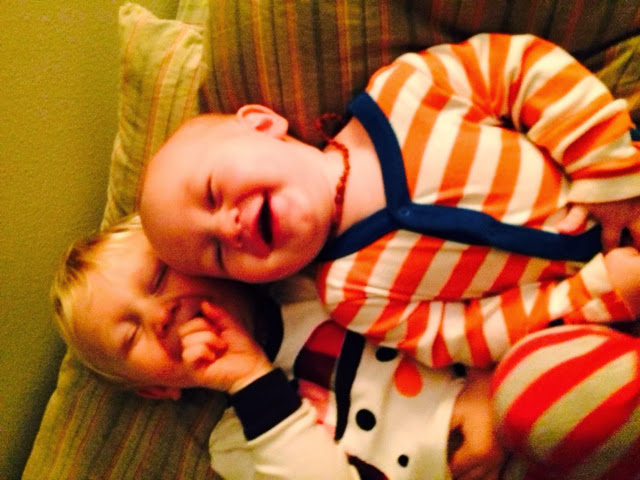 How adorable are these two? Their giggling made my heart smile quite large :) 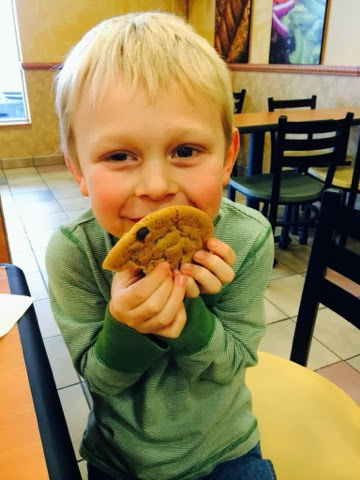 We stopped for lunch on the way back home...and this guy was super pleased to get a cookie with his turkey sandwich. It's the small things! 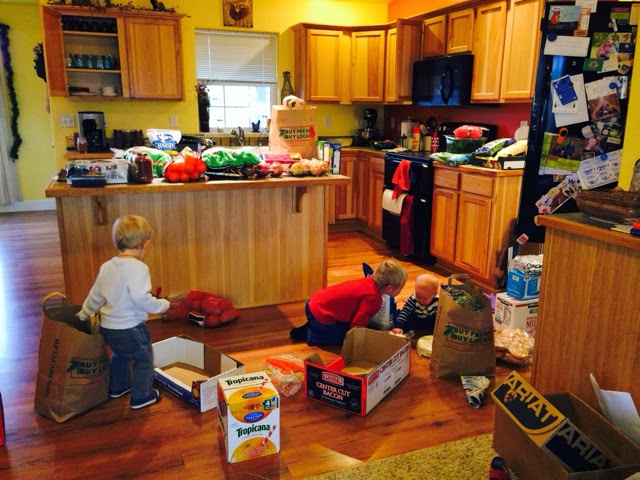 Throwing this picture in here too...this is what our house looks like post-Costco. I love having all these good groceries, but it's a half days worth of work just to prep and put it all away! Kids love helping though, which may or not be actual helping ;) 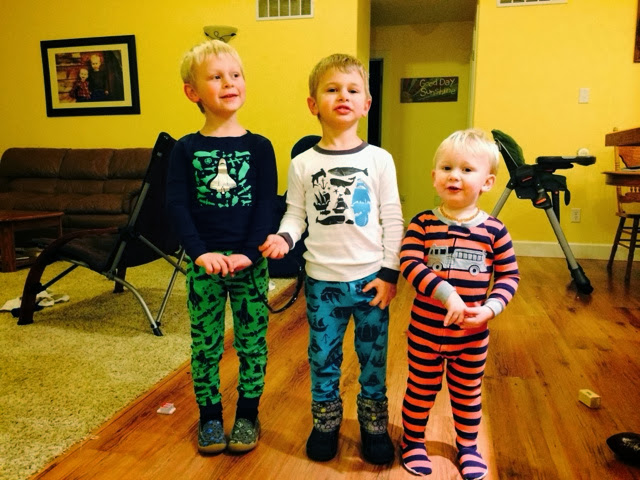 For New Years Eve, the boys got new jammies to stay up till midnight in! We had a grand time over at Nick and Beth Ross's house, fortunately just up the hill a mile. There were lots of kiddos there who all played hard, being sure to spend every ounce of energy trying to keep themselves up till midnight. And, they did! The men all talked about guy stuff and the rest played a massive game of  Apples to Apples and Thump. 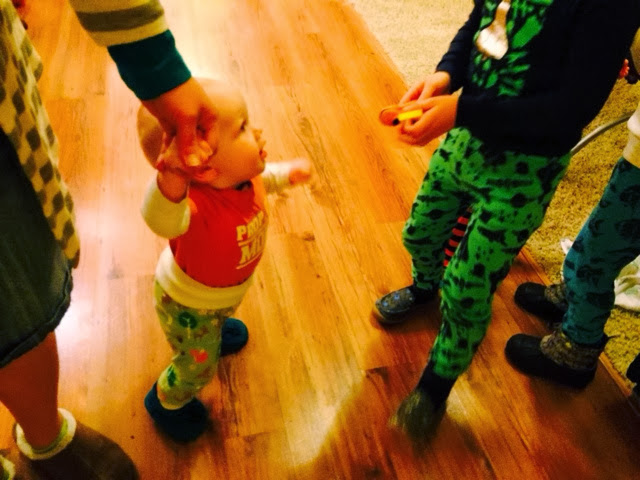 Look at this guy. Unbelievable. Too big. 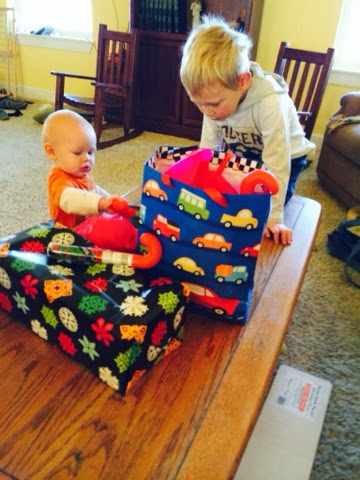 Even though the kids stayed up 3 hours later...they didn't, however, SLEEP IN 3 hours later. They woke up for pancakes for the first breakfast of 2014 and opened a new gift to welcome the New Year with a smile and a toy.

We're now 3 days in, and I think 2014 will be a GREAT year! Here's to hoping happiness, good health, and peace to all of you!