Some may have heard that Bentley was in the hospital last night...and I'll explain why. :(

Yesterday he was circumsized at about 10:30 in the morning. We were required to stay a half hour afterwards to make sure that he wasn't bleeding, which he wasn't, so we went home. After normal diapers (not much blood) all day, Sarah was holding Bentley, set him down at 7:30, then noticed blood on her shirt. His diaper was soaked with blood, soaking his jammies too. We hurried into the ER in the 0 degree weather. Our poor baby had an IV, and blood drawn numerous times, wearing heart moniters, while nurses were desperately trying to stop his bleeding from his circ. They also took my blood if there be need for a transfusion, which thankfully there wasnt.We got transferred upstairs to a room in PICU, where we settled a little easier. It took over 3 hours for it to stop bleeding, and he stopped just in time, as they were just calling a crew for LifeFlight to take him to Spokane. (he must have known his mommy would get sick in a helicopter) Down in the lab, they tested his blood for blood disorders, clotting disorders, and checked his platelet levels. ALL of which came back completely normal. Then the big questions was WHY he was bleeding sooo much!?! We still don't know exactly, but it may be a deeper blood issue (they're sending blood to a lab in MN too) or there may have just been an artery clipped during the circ. We'll hear more later when test results come back. We are watching him closely...he's able to wear a diaper now, which is nice :) We were released this afternoon, and hope to get a good nights sleep tonight, and pray for no more bleeding. We have an appt scheduled for Friday afternoon to get his site checked by his pediatrician. The picture was from this afternoon, once he got all his moniters taken off. He was sooo good thru being poked and proded, he only cried a small handfull of times, and his vitals stayed super strong even though he had lost a lot of blood and was being handled constantly. He's so strong and such a trooper for putting up with this past day! 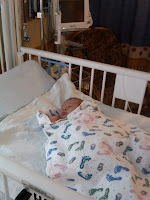 We are SO HAPPY that you are home and we hope & pray to continue to hear good news. Glad he was such a tropper (it makes it a "little" easier on the Mommy & Daddy). You do have two super adorable little boys and we can't wait to meet Bentley! Love & Hugs to all 4 of you from all 4 of us!

We too are so glad that you are home. We were thinking of you all day. Glad that things are improving.
Love
Hugh, Carmen, Trenton, Kadyn and Spencer

HOw scary! Glad to hear your are home and everything seems to be ok!

hope everything goes okay! how scary!

got your text last pm... glad you guys are home!! poor bentley; you, little man, had everyone scared silly! love you guys- happy everything's better! <3

So glad everything is well again...scary!

that would have been beyond terrifying...glad to hear he's doing well now! hugs!

Oh Lis wow! I'm so glad everything is OK. Give him snuggles for us. And keep us posted on what you hear back from the Drs and a his appt tomorrow. Love from Wi. :)

Oh my goodness!!!! So glad little Bentley is doing better! What a scare! Eli had some abnormal bleeding with his circ. too...thankfully nothing like that!!! Thinking of you!